Though it still came out in the middle of The Depression, there is a sense that Footlight Parade does not confront the contemporary issues head-on and maybe that causes it to lose some potential power. Because, in a sense, it’s a period piece even if that period is only a few years prior when talking pictures were taking the world by storm. Of course, many audiences will be far more acquainted with Singin’ in the Rain (1952), which arguably did much the same and even a better job in its homage than this effort.

Likewise, a bigger bankroll for the movies at Warner Bros. meant they got longer, which wasn’t necessarily all that advantageous. As far as stories go, this one is pretty much on par with its predecessors (42nd Street and Gold Diggers of 1933) though, rather surprisingly, the cast doesn’t run as deep.

Now we have James Cagney, of course, and what makes Footlight Parade deserving of a special side note is the fact that it would serve as the Warner Bros. gangsters first chance to hoof on screen. Because he wanted to prove that he was more than a thug and boy was he ever, even if the picture never really stretches him. Above all, he’s Jimmy Cagney, through and through.

John Wayne makes a picture-within-a-picture cameo in The Telegraph Trail which is shown to Chester as a demonstration of the imminent reality. Silent pictures are totally on the way out and this new attraction will grab audiences away from the stage. With the changing industry goes Chester’s livelihood. His galling wife isn’t too understanding calling for a divorce rather than wait around for him to be completely destitute.

However, Cagney’s able to capitalize on his newest doozie of an idea that comes to him after a mundane visit to his local drugstore. He translates it to talking pictures. He pitches it to his two boob bosses and they bite on his vision to develop live “prologues” that can then be showcased in movie theaters all around, making them lots of money. It’s a good idea but their closest rival Gladstone has already jumped on the wagon. It’s no small coincidence that Chester’s longtime assistant jumps ship and conveniently leaves behind another parasite to swipe ideas.

The one person who stands by him through everything is his loyal and lovestruck secretary Nan Prescott (Joan Blondell), who nevertheless uses her acumen and street smarts to keep the utter insanity of his current work life tolerable. With the wolves primed to devour him, she’s just as feisty, out to protect his interests (and hers as well).

In the end, Chester smells a rat and puts the studio on lockdown as they race against the clock to churn out the three numbers they need to showcase to their potential backer, Mr. Apolinaris, who, despite ongoing indigestion, is a generally agreeable audience. 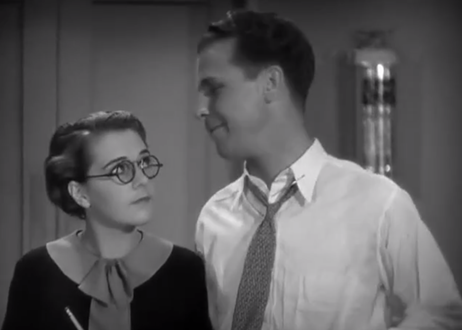 Ruby Keeler is hidden behind a pair of specks to play up unwarranted stereotypes in a generally uninteresting role. Meanwhile, Dick Powell and his huffy patron have little to do. You understand why Powell wanted a different career trajectory because there’s nothing to stretch him.

His patron’s bubble-headed brother, played by Hugh Herbert calls to mind later types paraded in front of the screen by Billy Gilbert. He relies on her sway, otherwise, he wouldn’t be able to hold onto his position as the resident content watchdog who constantly badgers Chester only to get the brush. Frank McHugh cultivates his gray hairs exasperated as the dance choreographer continually bombarded by incoming stressors on the eve of the big performances. He’s teetering dangerously on the verge of a nervous breakdown.

When the first line of an audition is, “show me your legs” and obviously it’s only for the gals, it just rubs the wrong way. There’s also an inherent sense that there needed to be more dancing and less plot, as much as I would follow James Cagney to the moon and back, figuratively speaking. Even “Honeymoon Hotel’s” repetitive cadence gets tedious and it feels more cutesy than a prime showing of Berkeley’s usual visual inventiveness. It’s the same issue I had with earlier numbers like “Pettin’ in the Park.”

However, the subsequent waterfall number gets us back to his element, by some unimaginable feat, we end up at a lavish pool gilded with finery. In an instant synchronized swimming was born (or at least promoted) and for some inexplicable reason, those overhead shots capturing the unified motion and shapes of the swimmers still blow my mind even today like a huge crowd creating shapes at a football game. What we receive is sensory overload of gestalt principles executed beyond what could possibly be imagined in terms of meticulous intricacy.

With “Shanghai Lil” Cagney gets in an excuse for a choreographed brawl which he handles ably and we do see him dance. It’s difficult to put into words completely but it seems a very sturdy approach with his feet working hard while his torso remains all but inert. It’s like there’s business on top and a party going on down below which gives him a fairly unique mechanic on the floor, resurrected from his earlier days in vaudeville.

What comes last is an ending meant to rival Gold Diggers fo 1933, still impressive but not nearly as meaningful. The “Shanghai Lil” trades out the stirring nationalism and triumph of the human spirit to cater to a number about a Chinese streetwalker played by Ruby Keeler in yellow face. Even with a turn toward the patriotic, it just can’t quite compete. But as always, it’s hard not to simply fall back on Cagney and praise him for guiding the picture with that surehanded tenacity of his that sees us through to the end.