There’s no doubt about it. Jubal boasts absolutely gorgeous imagery and how can you miss with a backdrop as majestic as the Grand Tetons and Jackson Hole, Wyoming? Its looming grandeur is evident in just about every single exterior shot — a continuous hallmark of classical frontier visions.

This element alone will quickly cause many western aficionados to recall one of the finest in the genre, George Stevens’ Shane (1953), which was also shot in the same area and consequently, exhibits a broadly similar plotline. However, that can be attributed to the fact westerns often busy themselves with tales of lone drifters riding toward new destinations in an effort to escape some unnamed force in their past. Jubal (Glenn Ford) is molded out of the same archetype.

Except Jubal winds up at the cattle ranch of the welcoming Sherp Horgan (Ernest Borgnine), who finds the other man frostbitten and proceeds to give him shelter and a cup of coffee. That’s just Sherp’s way, even though he’s a fairly prosperous man with a pretty wife (Valerie French), he’s instantly likable and beloved by everyone, in spite of his good-natured prattling.

The figure instantly positioned as an antagonist is Pinky (Rod Steiger) who right off the bat accuses the other man of smelling of sheep. He holds sheepherders in disdain but soon feels like his position on the ranch is under threat. Because despite being a newcomer, Jubal instantly makes an impression as a reserved but nevertheless trustworthy and hardworking ranch hand.

He gains the favor of Sherp even as he’s bent on moving on. That’s his nature. Delmer Daves serves as both screenwriter and director, adapting a story bearing the strains of Shakespeare’s Othello but again, like comparison’s with Shane, it’s true most stories have narratives scouring similar cisterns for inspiration. What matters most is what they offer us that is unique.

Ultimately, Jubal does decide to stay on a spell and the consequences are not unfelt. He conceals a buried hurt that supplies our character conflict. In some regards, as best as I can describe it, he fits too neatly into a box as it all comes gushing out when talking with a pretty ingenue played by Felicia Farr. As he discloses his deep-seated hurt, Jube readily acknowledges he’s never shared this boyhood trauma with anyone else. There’s something about her genial innocence setting him instantly at ease. 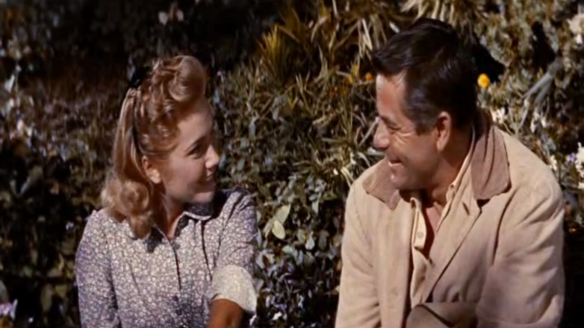 Her parents are part of an unnamed religious caravan searching for the Promised Land and Jubal is instrumental in allowing them to stay on the ranch, even as Pinky fights for them to move along. He’s continually looking to belittle and lessen Jubal in Horgan’s eyes by any means possible.

Meanwhile, the seductive onslaughts turned toward Jubal, coupled with slanderous verbal assaults from a jealous rival, look to take the man down one way or another. Yet he will do nothing to compromise himself. He stands firm with integrity but like Joseph with Potiphar’s wife, you know he will be blamed for something he had no hand in.

The whole film is really an exhibition in differing acting styles rubbing up against each other. Rod Steiger, of course, immersed himself in “The Method,” famously playing alongside Brando in On The Waterfront (1954). In Jubal, you can very easily see the early shades of Officer Gillespie, though Pinky is arguably worse as an animalistic brute with a bur in his backside.

You can also easily see how his animosity could have spilled over into everything and soured his working relationship with Ford and Borgnine, who maintain a more naturalistic even intuitive style. Regardless, each man feels well-suited to their respective parts.

The same can be said of John Dierkes as well and Noah Beery Jr., as genial as ever, playing on the fiddle as another ranch hand. Charles Bronson at first seems a curious even suspicious character although his purpose becomes evident as he becomes the go-between to vouch for others, knowing both the worlds of the religious pilgrims and the ranchers. Jack Elam is features though he doesn’t have much to do while Victoria French’s role relies heavily on her being a tantalizing seductress, constantly coaxing Jubal into some sort of romantic tryst.

The film is a testament to the intrigue found in continuous antipathy and an almost fatalistic sense of powerlessness in the face of inevitable doom. In other words, no matter how hard he tries, it seems like Jube will never be able to win.

My main qualm, however, is in the ending. I’m used to abrupt endings but the film seems to have delegated its time in the wrong ways. The beauty of the film thus far was its smoldering potential threat which led to some invariably dark turns. By the final juncture, we essentially know what will happen but we relish them coming to fruition in a cathartically cinematic fashion.

While Jubal gets the girl and clears his name, he only gets a very brief showdown with the continual thorn in his side, Pinky, before the doctor comes out of the shed to pronounce death with the other man being guilty of certain indiscretions.

So in very basic terms what could have been a more thrilling culmination is all but cut short. Vindication is made easy. Otherwise, the picture boils to the end thanks to the maddening rage of Steiger, which is capable of twisting every minor detail into more ammunition to try and sway the mob and bury another man in his premature grave.

The necessity is that Ford is and remains throughout the film a white knight, never has a lapse of character, and even goes after the good girl. It’s the circumstances that are constantly against him. It makes for a tumultuous and repeatedly helpless state of being for the entirety of the film. The blip before “The End” loses a bit of this tension but up to that point, Jubal makes good as a friction-filled western drama.