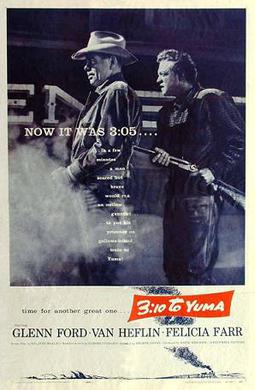 The picture showcases a parched landscape of cacti and dusty trails — the arid terrain accentuated by purposely tinted photography. It’s aided by that bleak black & white palette courtesy of Charles Lawton Jr., just as Delmer Dave’s earlier western, Jubal (1956), was made by its vibrant imagery around Jackson Hole. Each fits the mood called for impeccably.

Setting the scene, you have Frankie Laine belting out the epic title track with his usual gusto; the opening gambit with focused precision initiates a holdup and the repercussions of such an act. This coach headed for the Arizona outpost of Contention is robbed and the driver killed. The culprits are Ben Wade (Glenn Ford) and his band of thugs.

Felicia Farr is reteamed with Ford refilling the drinks of all the boys as they brazenly ditch the crime scene and head to a nearby saloon to drink it off.  The sparks fly between the pair as they’re both a little less saintly compared to the previous year’s Jubal (1956). Except their romancing isn’t the meat of the storyline. For that, we must turn to the other man who was indirectly affected by the robbery.

Dan Evans (Van Heflin) is a struggling rancher plagued by the local drought, but he and his two sons also witnessed the holdup go down. Pretty soon, Wade is captured and Evans signs on for $200 that will help him get by. Together he and another man, the town drunk, carry out the sheriff’s plan to transport Wade for safekeeping while they wait it out for the 3:10 to Yuma.

Lacking the edgier shoot ’em up qualities of its still thoroughly engaging remake starring Christian Bale and Russell Crowe, this original offering from Daves, with a story by Elmore Leonard, must be first and foremost a character study and it is an exemplary one.

It’s an assignment of such an intimate even personal nature although Evans only took it for the money. In one scene the outlaw sits around the family dinner table like a regular guest, except he’s handcuffed and the curious boy pipes up asking questions about him. Then Wade sits at the table and has a nice long talk with Mrs. Evans that almost makes him seem human. That’s just it. He’s done some bad things but it’s hard to get away from the fact he can be a rational, even decent person.

But the epitome of the picture comes near the end when the two men hold up together in a hotel room waiting for the minutes to pass, knowing full-well Wade’s men will be coming any minute to have it out. There’s a ticking clock plotting device in use like High Noon (1952) as one of his cronies (Richard Jaeckel) is milling about waiting for the reinforcements to come. But also everyone in town is anticipating the incoming train.

Glenn Ford evolves into the devil on the shoulder, constantly testing Evans through proposed bribery and parlor tricks that provide all sorts of distractions to wear down his captor. His coolness juxtaposes nicely with the antsy ranchhand with dynamics running analogous to The Naked Spur (1954). This time Glenn Ford is doing the continual psychological manipulation instead of Robert Ryan. Ryan is good but I think here Ford works far better across from Van Heflin.

As heroes, they are similar types (see Shane or Jubal) and that makes Ford’s corrupt turn still somehow mirror the other man. In a different life or maybe a different film, we could see how the roles might be reversed. For now, they must deal with claustrophobia that’s certainly exasperated by confined space but really exerts itself throughout the finale, even outdoors. It’s not so dependent simply on the physical location as it is the pressures bearing down on the character of Evans.

It’s a contentious proposition, no small coincidence that right there we have the name of the town but at least Dan is not standing alone… This quickly changes when the gang materializes and proves to be more formidable than initially suspected. Rapidly his backup, made of family men just like him, has quickly dissolved and it’s just him against a band of cold-blooded killers.

The final moments are an exhibition in heroism where it takes one man like Evans, bent in his personal resolve to see his job to completion, even as the deck’s stacked against him. Again, we have echoes of High Noon.

It’s true everyone continually hammers home the fact. By this time there’s no amount of obligation. The man who hired him on (Robert Emmhardt), his frantic wife (Leora Dana) rushes to get him to change his mind, even his prisoner tells him the same. And yet he sticks with it because one man has died — a man who granted might have been slightly misguided — yet he believed in some form of law and order enacted by the people for the people. That’s what makes Evans proceed with this near-suicidal mission. It has to do with moral rectitude and committing to what you deem to be right — even if there’s a cost.

Does the picture chicken out in the end? I’ll let you decide for yourself. Regardless, Van Heflin and Glenn Ford are in fine form and require the viewer to brace themselves for a tension-filled ride. One could argue 3:10 to Yuma is forged and won in their scenes together. Everything else is informed by this central relationship.