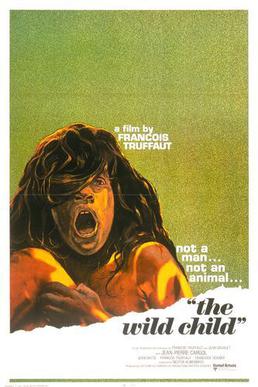 The Wild Child (L’Enfant Sauvage in French) is based on “authentic events,” as it says because Francois Truffaut became fascinated by a historical case from the 1700s. A feral boy was discovered out in the forests and then taken under the tutelage of a benevolent doctor.

Although he had initially wanted to adapt The Miracle Worker, Arthur Penn got to it first and released the rendition of Helen Keller’s story to much acclaim. Instead, Truffaut pored over the medical observations of one Dr. Jean Marc Gaspard Itard relating to the curious case of the aforementioned Victor of Aveyron. Somehow this effort follows in the same vein of The Miracle Worker but feels entirely organic and indigenous to Truffaut’s roots.

There are several immediately striking elements about The Wild Child that become immediately apparent. At first, I wasn’t expecting the black & white cinematography, but somehow it makes so much sense. It’s an intuitive expression of the world and frequent Truffaut collaborator, Néstor Almendros, shoots the world with a stark, no-frills tintype aesthetic proving quite extraordinary.  The pictorial simplicity is impeccable. Meanwhile, the soundtrack is equally spare, all but scoreless, aside from interludes of Vivaldi when appropriate.

The second notable aspect was the opening dedication to Jean-Pierre Leaud. This only makes sense if you consider the lineage of Truffaut and where he has come from. Certainly his first and greatest achievement was The 400 Blows, which starred Leaud as a wayward youth — not far removed from Truffaut’s childhood or Leaud’s own.

Their relationship remained closely intertwined even as it charted the course of the Nouvelle Vague with the works of Jean-Luc Godard and the resurgence of the Antoine Doinel character in Antoine and Colette, Stolen Kisses, and the still forthcoming Bed and Board.

Of course, in following the historical discovery of a feral boy in the woods of 18th century France, the environment and context could not be farther removed. The opening moments are a striking wilderness chase scene with the naked boy living off the land and fleeing from a pack of hunting dogs, looking to smoke him out and earn the good graces of their masters.

It’s the story of civilization impinging on the natural world even if it is under unusual circumstances. The narrative isn’t an altogether novel one if you remember any historical examples of Native Americans who were shamelessly paraded through so-called “enlightened” western society, like sideshow attractions, only to be decimated by their diseases.

Still, Truffaut films are nothing if not personal, and The Wild Child fits into this personal collage. Each one of his films, individually and together, is sculpted by his ideas into vessels of art and creativity — ways in which to see the world and make sense of it.

If nothing else, somehow he seems to empathize with the circumstances. First, from the child’s perspective, to be left for dead, without parents until the age of 1,1 and then thrown into a world you cannot comprehend. But he has also evolved into the adult — in this case Dr. Itard — who, in a show of sympathy, makes the boy his charge, if not a pet project.

Truffaut is so invested in this role he throws off all pretense of merely being behind the camera and takes on a role in front of it. Both cinematically and practically, he is the boy’s mentor and guide without an intermediary of any kind.

You can see how deeply he empathizes with other human beings and somehow the good doctor seems like a fitting stand-in for Truffaut himself, on multiple accounts. In a society that looks down at this boy, seeing him merely as an outcast, an idiot, a pariah, Truffaut/Dr. Itard sees someone worth salvaging. He won’t give up on the creature’s intelligence nor his primal urge toward morality  — some latent iteration of the noble savage.

And yet he can still be an exacting, obsessive taskmaster. All for the creature’s own good mind you, but there you are. Whether it be the acquisition of language, intelligence, or cinema, you can easily see how any of the three could overlap. He has the end goal in mind, and he’s so unswervingly devoted to the success of his pupil, even to the point of feeling callous at times.

Was this the way it would have been with a wayward, youthful Leaud? Was this Truffaut with his mentor and father-figure Andre Bazin? All seem to be hinted at and as an audience, we can only surmise. Because you have this complicated tie between teacher, antagonist, and friend underlying this film, regardless of its period context.

Someone who opens up the world to you in their infinite wisdom, but no doubt causes you to want to rebel at other times. This is integral to our nature, not only as children but when we grow up too. Only when we’re older are we granted the full lucidity to see everything clearly with the benefit of hindsight. To see the motives behind discipline, tough love, and the implementation of rules.

If I’m to search my own heart, it is not always noble. It is not inclined toward good and has a predilection toward selfish and petty ideas. It takes some framework, some discipline to rein in, but not with the dismissiveness of the civilized elite from Paris and the learned academics. The honest to goodness humanity of Dr. Izard/Truffaut and the maternal affections of Madame Guerin are a fine place to start for reference.

Victor isn’t a miraculous case study during his time in their home by any means. He’s a work in progress. But isn’t he a far cry from where they found him — naked, wild, and living in a hole — self-sufficient though he may have been? As children, we are often content making mud pies in the sand when he could have something far better.

As someone who has dabbled often unsuccessfully in the field of education, you realize it’s the little victories that feel like moving mountains. Thus, when Victor begins to retain information, return home of his own accord, and spell at the word “LAIT” when he wants milk, these are miraculous in themselves.

Still, it takes the adult to have the foresight to know what will be in the child’s best interest. Things get more convoluted when the dynamics change. That, folks, is what we call the teenage years. Because it’s true sometimes, what people think is in their best interest differs greatly.