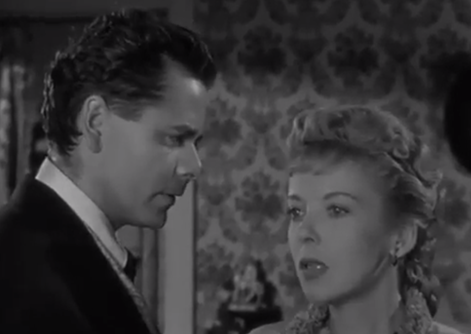 The movie opens with a score raging with dramatic tones fit for a title like Lust For Gold. The resulting narrative ploy is not a new one either, suggesting the details of this “unusual situation” were substantiated by historical records and legends of Arizona. It’s meant to provide this obvious sense of real-world ethos.

We find ourselves at Superstition Mountain. A severe voice, strung out with the same dramatic intensity of the music, paints a wild portrait of this horrible place — Satan’s art gallery in the rocks.

His name is Barry Storm (William Prince) — a real figure — and yet for all intent and purposes, conveniently fictionalized to narrate the tale for us. Unfortunately, the man isn’t able to pull off the voiceover like a Bogart or Mitchum. It lacks the hardboiled lip or the inherent sense of noir malaise.

It’s possible to mention noir, even when our prerequisites are more aligned with a western because we are dealing in terms of avarice and the greed found within the human heart. These are the building blocks for any respectful film noir of old where humanity runs amok with murder and deceit. In any regard, this is what the hope is.

Still, Prince comes off lacking from the outset because as an actor he’s a bit of an innocuous blank slate. Even if this is purely how he is meant to function, there’s nothing impressionable about him. But it also falls partially to the anatomy of a faulty story with dialogue practically regurgitated to us to get our pulses going. The effect is moot.

Still, this version of Barry Storm does serve one solitary purpose if only to toss us headlong into this narrative. He’s part unwitting victim, part fresh-faced raconteur and adventurer looking to dig up the famed treasure once belonging to his distant relation “The Dutchman.”

He crosses any number of people among them cocksure explorer Floyd Buckley (Hayden Rorke) and two fellows who act as deputies under the local sheriff: a relaxed fellow named Covin (Will Geer) and the quietly observant Walter (Jay Silverheels).

To their credit, they are the first people who bring some color of any sort to the picture. However, even Geer’s own recounting of the Dutchman legend — delivered in a casual, conversational manner — isn’t able to rescue the dialogue which feels just as straightforward and didactic as before.

The real meat and potatoes of the movie come with a substantial flashback moving the action to 1880, and it couldn’t come soon enough. Because it’s at this juncture we are reminded Lust for Gold has a surprisingly stellar cast, and the best patches of drama come with the biggest stars. Regrettably, they’re never able to assemble in full force spread out across the years as they are.

Glenn Ford is reteamed with Edgar Buchannan from Framed, although this time they’re a bit more dubious and hardened, following the trail of a mythical gold mine. If you were to fashion an approximate reference point the movie, functions a bit like Treasure of The Sierra Madre Lite with everyone gold crazy and opportunistic.

Glenn Ford is not much of a Dutchman. His accent or lack thereof could have used some sharpening if he was really looking to commit, but perhaps, more importantly, he shows himself capable of some vindictive fury before the days of The Big Heat. This is what the story must rely on.

He’s the man who ends up the victor with all the gold to himself and no one else left alive to challenge him when he checks his wealth in the nearest outpost. The whole town’s envious of his cache, and the news spreads rather hilariously through the local gossips. They want a piece of the action because it’s far too much wealth for one man, but he clings to its with near-violent secrecy. There’s not one male or female who’s going to get him to open up about it.

That doesn’t keep them from trying. The best bet is one Julia Thomas (Ida Lupino), an educated woman who nevertheless runs the local mercantile and doesn’t have much hope of going anywhere. Her useless husband (Gig Young), hasn’t done anything to alleviate their situation. So, much to his chagrin, she’s prepared to slip off her wedding ring and weasel her way into the miner’s affections.

It works quite well and as with any of these old star vehicles, the movie is most enjoyable when we have Ford and Lupino together. They were both seasoned performers in all the grungy corners of the genre pictures even if this is a hybrid. But what sets them apart is how they both have desires. Sometimes opposing, sometimes convening, and their feelings for one another do become complicated.

To her credit, Lupino plays a far more nuanced part than a simple seductress. She is tired of her life. She is tired of her husband. She’s ready to take things into her own hands, and yet there is some amount of feeling dwelling within her. The Dutchman, for one, is happy to find someone to hold, someone to share his native tongue with. It’s the human face slipped in with the pervading moments of avarice.

Because in the end all parties are pitted against each other in a testy competition for the goods — both in the past and present — weathering seismic avalanches and showdowns up in the rock crevices. Some of these moments, especially crammed within the middle of the story have the pulse of compelling action. It’s only a shame this hybrid noir offering must be so hampered by its own plotting device.