Any conversation on quintessential American Westerns certainly has to at least consider Red River. It has genre mainstay John Wayne in one of his most stirring performances, a moody precursor to The Searchers. It boasts the debut of the often criminally under-appreciated method actor Monty Clift. Moreover, it’s cinematic space is filled out by a colorful array of prominent Western stock players. You have the always ornery Walter Brennan, pudgy Noah Beery Jr., Harey Carey Jr., Hank Worden, and numerous others. For a second you can even forget that this isn’t a John Ford film, but instead, the story is placed in the ever-adept hands of Howard Hawks, who knows how to craft compelling stories no matter the genre he’s working in.

In 1851, before Tom Dunson (Wayne) settles on a new plot of land near the Rio Grande and begins to raise his cattle with the brand of the Red River D, he loses the love of his life to an Indian raid, while also picking up an orphaned boy in the aftermath. That young man, Matt Garth (Clift), would become like Dunson’s adopted son and his right-hand man when it comes to running his ranch. The rest of Red River is essentially a road film that chronicles the first cattle drive along the Chisolm Trail. It’s bound to be a gritty, sweaty, and undoubtedly smelly road ahead as Wayne and Clift take the reins on this journey. The intrigue comes with power dynamics because when you put two or more people in a confined space sparks are bound to fly at some point. 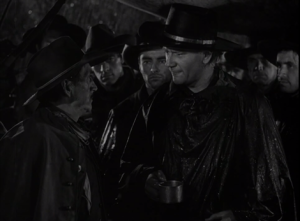 When Dunson begins the massive journey to sell his cattle in Missouri, many wranglers sign on for prospects ahead, but they don’t quite know the degree of hardship that they will face. Soon enough, a stampede leaves one man dead and the company without one of their chuck wagons of provisions. Dunson is a hard taskmaster, who expects his hired hands to finish their job. Morale in the band begins to sink from lack of food and fierce downpours that leave most everyone dejected and distraught.

Then, when Dunson prepares to hang two deserters to make an example out of them, Matt must finally step in. He’s always the subservient one, always backing Dunson with his gun, but for the first time in his life, he crosses the will of his mentor. All the wranglers are quick to continue the journey as they change course for Abilene Kansans and the prospect of the railroad. But Garth leaves a brooding Dunson behind, vowing to kill Matt if it’s the last thing he does. It’s this act of the story which brings to mind the Biblical vendetta of Esau as he pursues his kin for stealing his birthright. 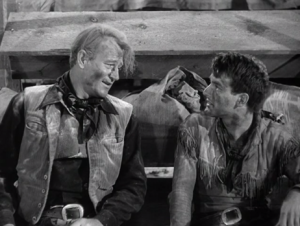 Garth and his contingent do end up getting to Abilene and are met with open arms by the kindly Mr. Melville, however, perhaps, more importantly, Matt falls in love with a fiery beauty (Joanne Dru) and must leave her behind. Days later Tess Millay also meets Tom Dunson, the man she has heard so much about, and he’s far from being dissuaded from his mission.

Thus, the expected showdown comes with Dunson riding into town with his hired guns, the alarm being sounded, and Garth waiting for him. Dunson draws and Garth will not. It’s a fitting moment, but Howard Hawks develops it in a fabulous way. He fills it with tension and ultimately a hint of humor. The addition of Joanne Dru shifts the power dynamic and she says what everyone else is thinking while angrily packing a pistol.

Because if Red River was story alone, it would not be the preeminent Western that it is, and I think I made that mistake before. Hawks is a master at using all his actors to perfection in not simply the climactic moments, but also the lulls. With such a substantial ensemble, even the way he positions all his players in the scene holds importance. His scenes are continually interesting from talk of Walter Brennan’s false teeth to complaints about the abysmal quality of the coffee.

My only qualm with the film is the rather shoddy transitions, and so I am interested in getting a look at the theatrical cut with narration from Brennan. John Ford famously quipped that he never knew that Wayne could act until this film, and it’s true that he gives a darkly vengeful performance. But in many ways, Clift proves himself as a worthy co-star. There’s always a tightness, a lilt to his voice, that signals an earnestness and vulnerability. It starts coming out in this film right when he knows that he’s no longer going to follow Dunson. It took two starkly different actors to make the narrative work as well as it did, and Hawks added yet another classic to his catalog. On a side note, the music of Dimitri Tiomkin was noticeable, because the refrains can be heard verbatim in Rio Bravo. If something’s good why change it, right?