World War II gave rise to a whole cottage industry of war films during the conflict and for generations to come. There are, of course, so many facets of the war to explore whether it’s Europe, The Pacific, North Africa, and any number of elements.

However, something that always fascinated me was life on the Home Front. Now wars feel like proxies. They rarely affect us first-hand. During the 1940s the war was a concerted effort on all fronts. It affected not only soldiers but civilians living miles away.

Mrs. Miniver (1942) chronicles the exploits of a fearless mother who holds her family together during The Blitz and the threat of German invasion. More The Merrier (1943) takes a comical look at the housing crisis that plagued Washington D.C. and other metropolis areas. Even the likes of Stage Door Canteen (1943) and Thank Our Lucky Stars (1943) give a picture into the USO and entertainment efforts put on for soldiers.

Here is a list of four other films from the World War II years that function as time capsules giving us some element of what life was like during those impactful years in history.

Certainly, The Miracle of Morgan’s Creek is another uproarious wartime comedy from Preston Sturges. But this other offering is equally memorable in how it takes on small-town jingoism and hero worship to outrageous proportions. Whereas most old war pictures look moth-bitten with age and overly saccharine, somehow this effort strikes a phenomenal balance between absurd satire and lucid sentimentality.

It’s not making fun of our war heroes as much as it lampoons how we try to exalt them in our own well-meaning blundering. There’s no doubt some of this was certainly acknowledged during the war although I’m not sure how the general public would have felt about the movie in that context. Now it looks prescient. Eddie Bracken, William Demarest, and company are absolutely hilarious 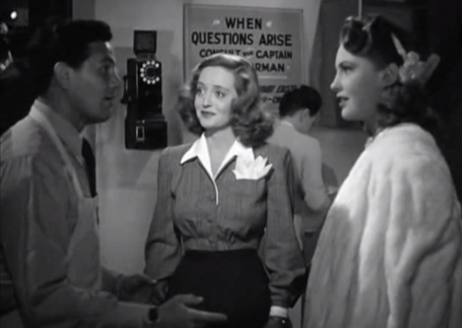 Actors Bette Davis and John Garfield of Warner Bros. famously set up the Hollywood Canteen as a haven for soldiers on leave. The perks were free and included dances with the most beautiful starlets and entertainment provided by the brightest comedic and musical personalities of the day. You could even win a raffle to kiss Hedy Lamarr.

Although the film is slight, sentimental propaganda, it does give at least a hint of what this group endeavor was all about. For old movie aficionados, it also provides a convenient opportunity to see just about every person Warner Bros. had on the lot in 1944. They all come out to the party to pitch in on the morale-boosting effort.

Whirlwind romances feel almost commonplace in the war years. Imagine the scenario. You’re longtime beau or the eligible man or woman you just met is going off to war. Miles will separate you. All you have are letters. There’s an uncertainty of whether or not you will ever see them again. The only thing that does seem permanent (even if it’s not) is love.

The theme would crop up in any number of pictures from The Very Thought of You to I’ll Be Seeing You as the situation undoubtedly resonated with a contemporary audience. However, another favorite is The Clock, starring Judy Garland and Robert Walker. It encapsulates the moment in time so well with heightened emotions, an unceremonious courthouse wedding, and the open-ending. We don’t know what the future holds. 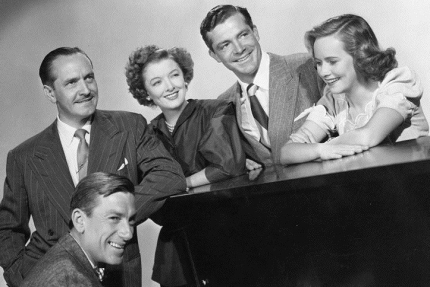 If Since You Went Away was David Selznick’s WWII epic, this was certainly Samuel Goldwyn’s entry. Its title plays with this ironic ambiguity. The best years of our lives would seem to be ahead of us. The war is over. The Allies have won. The soldiers return home victorious. And yet even in their victory, there is so much to navigate in the civilian world.

Wyler’s effort is such a perceptive picture in how it makes us feel the growing pains and relational tribulations of an entire community. It might be the fact you barely know your wife because you’ve been away for the majority of your marriage. Maybe your kids have grown up in a different world and there’s a corporate job waiting for you to reacclimate to. It might be PTSD or tangible physical injuries totally changing your day-to-day existence. As such the movie is indicative of a certain time and place and a tipping point in American society.

What is your favorite WWII film, whether it depicts the war or some aspect of the home front?