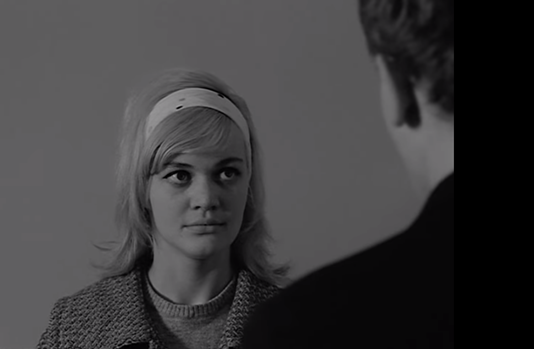 We lost the inimitable Milos Forman not too long ago and it was a minor embarrassment I had yet to watch one of his earlier works from his native Czechoslovakia where he was an integral member of what is now termed The Czech New Wave.

He was, of course, best remembered in the U.S. for a pair of films, One Flew Over the Cuckoo’s Nest (1975) and Amadeus (1984). However, looking at a picture like Loves of a Blonde oftentimes proves more elucidating because with smaller more intimate stories you sometimes are able to glean more about the director and gain a better sense of who they are.

True, those in the mainstream might find Loves of a Blonde‘s plot too featherweight and arthouse aficionados might be surprised to find how humorous it is. It’s hardly self-absorbed with its own importance. But if the right viewer finds it, they’ll surely be delighted.

The title track is the Czech equivalent to sex, drugs, and rock n’ roll, signifying a story that took full advantage of the temporary thawing of censorship behind the Iron Curtain. In this regard alone Loves of a Blonde is a remarkable relic.

In the opening moments, a girl in a dormitory tells her friend about an encounter she once had with a soldier. They shared talk of deer and how animals don’t have obligations like people. They only come together during mating season. There you apparently have nature’s argument for free love. Except for geese. They sometimes stay together for upwards of 120 years.

Simultaneously, a local factory supervisor — an older gentleman — looking to somehow boost the morale of the local female population, because all the resident males have been conscripted, strikes up a deal with a military man to ship in some men.

The People’s Army is welcomed into the town with all the trimmings. It’s the scene straight out of Hail The Conquering Hero (1944), albeit played realistically with men piling off the train to the sound of a brass band and fanfare. Girls waiting to view the smartly dressed men wander by in their uniforms. The destination in question: A dance.

Forman in such a document is willing to take his time on people who normally would not carry the screen, at least in a Hollywood picture. That in itself is refreshing and brazenly real or at least as real as it can be creating this lovely blending of professional and untrained actors all together. 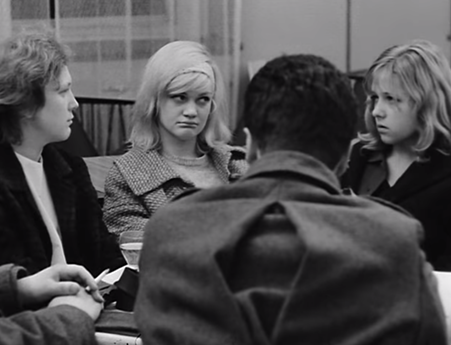 We settle in on a scenario that is reminiscent of a Middle School dance in America. Totally inept and awkward, as a trio of older men looks to catch the eye of three young gals — except these fellows are no Don Juans. Even the one who fancies himself the leader doesn’t know what he’s doing.

First, the waiter botches it all by dropping the expensive bottle of wine they bought off at the wrong table. They receive the inquisitive gazes of the women on the receiving end. It only gets worse when the waiter proceeds to remove said bottle and take it to the next table to rectify his error. They have made contact but it’s the ugliest of executions. Meanwhile, the girls who’ve caught them looking, again and again, aren’t quite sure if they’re flattered or not.

Then the normative rituals commence with the men bringing the girls over for a drink and the girls oblige almost as a nicety rather than for any want or desire. A ring rolls under the table which one of the bespectacled bumblers struggles to recover. The whole extended mishap features some of the most cringe-worthy comedic moments that I can recently recall. Only for bickering to ensue as the evening falls apart entirely. First, one man decides to go to bed and then the girls follow suit.

Andulla (Hana Brejchova) goes up to the room of a pianist warily, where he tries to teach her self-defense tactics. The inevitable happens and they wind up in bed together though he struggles to get the blinds in his hotel room down.

Afterward, he gives her the most peculiar compliment. She’s angular like a Piccaso guitar. And he’s generally kind but we know this is just a minor thing to him. Not that he’s trying to take advantage of the girl per se but it doesn’t carry much weight for him. There were other girls in other places. And yet for her, it’s possible that she’s never felt so close to someone before. For her, this is love or at least something close to what she is searching for. He vaguely invites her to come see him sometime and she resolves to take him up on the offer. 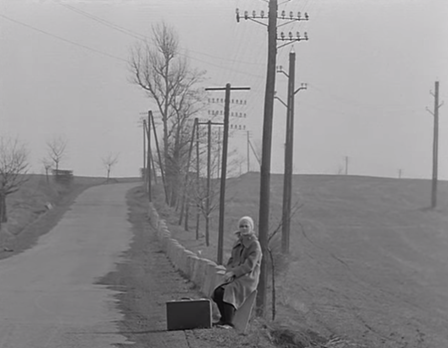 There are these moments that follow where it feels like we are watching a screwball comedy. She meets the parents, suitcase in hand, asking for their son. And they have no good answer for where he is. They’re even more confused about what she’s doing there and why.

Father just wants to watch TV and mind his own business. He thinks his nagging wife is nuts but not as nuts as his son. Bless her soul, but the mother is a certified worrywart thrown in a tizzy about just about everything. I’m sure most of us know the type played to the extreme here.

Son arrives home and his disapproving mother makes him join the parents in bed. She’s not about to let him sleep in the same room as the girl. They’re like the three bears crammed into a bed together, bickering and saying that the girl should have never come in the first place.

It fascinates me how one seemingly ephemeral idea that might only be a quick flash of an image or a concept can lay the foundation for an entire picture. Forman was himself a child forced into migration at an early age by the Holocaust and in his young adult days witnessed a girl lugging her suitcase around the big city without anywhere to go. He gave her a lift and heard her story.  She had been invited by a man she’d met who really had no intention of having her at all. It’s just what you say. It’s the etiquette of it all but it doesn’t really mean anything. At least not to most people. There we have the story’s defining motif.

There’s an innocence that radiates from Hana Brejchova’s eyes; she’s so very youthful and still trying to figure out her life. In dismissive terms, we’d call her a dumb blonde but this film suggests something more — a person who is trusting and wants real love.

So due to a temporary relaxation of censorship, Forman’s film could be broken down to frank depictions of romance and free love but that is not its end goal. Because even in those forms of expression, we find a surprising amount of, not only astute observational humor about humanity but an equally telling melancholy. Loves of a Blonde is a testament to both.