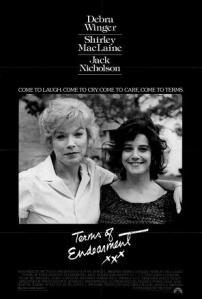 I owe a comedic debt to James L. Brooks and that’s for the basic fact that he’s made me laugh countless times, namely because of his work with sitcoms. The Mary Tyler Moore Show and Taxi are two prime examples. The casts he brought together and the writing, the writing is just absolutely superb, orchestrating that tricky balancing act between humor and heart.

When I look at Terms of Endearment from a purely objective perspective it looks like a wonderful picture. James L. Brooks, the mastermind of so many great projects is writer, director, and producer. It’s his first time behind the camera for a film and his cast is what most others would only dream about. Looking down the cast list is like a hit parade.

Shirley MacLaine as the widowed Aurora, the quirky mother who is strangely difficult, looking for love and still somehow detached — with both her daughter and a plethora of male companions. The always spirited Debra Winger as her daughter Emma. Her husband, the fresh-faced lawyer, Flap is played by Jeff Daniels. The always devilishly grinning Jack Nicholson plays the washed-up astronaut next door who makes the strangest and somehow most viable of suitors for Aurora. And the other nooks and crannies are filled in by the likes of Danny DeVito and John Lithgow. So with such a rank and file, there’s no question that this film should be remarkable.

But for some reason, it just doesn’t come off. It’s not that it doesn’t have its moments or that it’s not intermittently funny, romantic, and moving. There are tinges of those qualities that this film is undoubtedly looking to elicit. But for some reason, one that is somehow difficult to articulate, Terms of Endearment never brought me in like the truly great films have a habit of doing.

Was the plotting too slow? Were there too many characters? Was it due to the fact that I have never been a huge admirer of Shirley MacLaine’s work? To each of these, I would have to give a fairly decisive “No.” In fact, for me, this is one of MacLaine’s finest roles (along with The Apartment) to date. She’s somewhat perturbing, inscrutable you might say, but that also makes her the most interesting character. Watching her cold maternal figure evolve is one of the interesting aspects of this story.

Because she is trying to learn what it is to love and in a sense what it is to show that affection which comes second nature to most. Over time I’ve become increasingly impressed with Debra Winger because there’s always something so dynamic about her — a certain vitality that allows her to do comedy and tragedy equally well.  Both are on display here but for that same unknowable reason, Terms of Endearment did not move me as much as I expected. That’s no criticism just the simple, honest truth as clearly as I can lay it down.

But I respect this film because any film about people, their relationships, and how they navigate the tragedies of life is worth at least a little bit of trouble. Parsing through those very relationships is what this story cares about like Brooks’ earlier works. Maybe it did not affect me as much as I might have expected but that does not take away from the fact that mother-daughter bonds are worth exploring as are marital turbulence and personal tragedy. Because each of these is a very real circumstance and there’s something incredibly honest in trying to examine such things. For that, I commend Brooks as well as his film.  I will not be singing its praises necessarily but we all can respect Terms of Endearment for the very fact that it’s sincerely trying to dissect our world with wit and grace. Whether it succeeds is very subjective indeed. But then again, that’s part of the magic of the movies. At their very core, they are subjective. 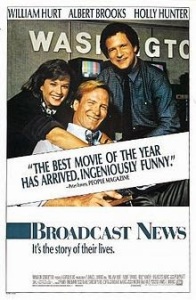 I didn’t laugh at James L. Brook’s Broadcast News like I would your typical comedy (This is no Anchorman). However, I did find myself chuckling, in spite of myself, because these characters are humans and as humans, they are screw ups, petty people, and have errors in judgment. The humor comes in the everyday occurrences of working with a news station. There is constant chaos paired with egos butting heads and somehow the news still  gets reported.

At such a news station there are three seemingly everyday people who form a triangle of sorts. First off there is Tom Grunick (William Hurt), a handsome anchorman who is often sincere but lacking in the smarts and experience of others. Then, you have Aaron Altman (Albert Brooks), an experienced reporter with a gift for writing and a dream to be an anchorman as well. Finally, caught between the two fellows is manic producer Jane Craig (Holly Hunter) who excels in her career.
Aaron is a longtime friend and partner of Jane who secretly loves her. Tom comes into the picture as the inexperienced one, and it looks like he won’t be going anywhere. However, he gets his chance with a special report and thanks to Jane he hits it out of the park. It so exhilarating and all of a sudden he feels a lot closer too. That’s what Broadcast News does to these people. It makes them feel that much closer and it begins to make it difficult to filter their feelings. That’s how Jane finds herself caught between two men who both seem to love her.
It takes a major layoff to shake up the status quo and it reveals a bit more of the pettiness that exists within the industry (reflected some by Jack Nicholson’s evening anchor). Aaron quits his job, Tom gets promoted to a post in London, and Jane gets the position of her old boss who receives the boot. Aaron is jealous of Tom and his goodbye to Jane is a rather sour one. Jane, on the other hand, has some choice words for Tom when she finds out how he manipulated one of his news reports. That’s the way life is. It might be set up like a perfect love triangle initially, but then no one seems to win in the end.

We come back to the three individuals a few years down the road and they have all moved on with their careers and their personal lives. Not everything is patched up and they hardly have much in common anymore, but they can still talk and continue living their lives as before.

This film did not strike me as laugh out loud funny or remarkably spellbinding, but it was a truthful look at life at a news station. That in itself is a compliment to the film even if it is not altogether extraordinary because it seems genuine. I will certainly always be a fan of two of Brook’s other creations for the small screen, The Mary Tyler Moore Show and Taxi. He has a great breadth of work to be proud of.
3.5/5 Stars