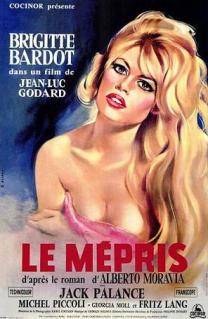 Directed by Jean Luc Godard and starring an international cast including Brigitte Bardot, Michel Piccoli, Jack Palance, and Fritz Lang, this film within a film is Godard’s personal examination of the cinematic world. It opens with the shooting of a scene only to have the camera turn to face on the audience. Then begins a story where a screenwriter married to a beautiful woman is called upon to write a new screenplay for an adaption of the Odyssey. The producer is a vain and loud mouthed American who quickly has his eyes on the producer’s wife. Other members in this production are the real life legendary director Fritz Lang as well as the producer’s personal female assistant. Things begin to turn for the writer after he leaves his wife with the American playboy. She begins to become distant and she finally acknowledges that she no longer loves him. One of the famous extended sequences focuses on the argument they have inside their residence. In the course of the scene their relationship begins to crumble and finally goes beyond repair. This turn of events is very obviously paralleled in the Odyssey by Odysseus and Penelope. In the end the wife leaves with the producer and screenwriter is left in Italy to help finish up the film alone. Little does he know what has happened. Fellini’s 8 ½ may be a greater film about a filmmaker and his art, but I think “Contempt” is important because Godard focuses a great deal on the conflict between the commercial films of Hollywood and the art films of Europe. His film is more about each individual person who together make a film production possible, and he brings it to the screen with one of his best casts.