It’s no secret that Gene Kelly had a deep abiding affection for France. He was fluent in the language also becoming the first American ever bestowed the honor of arranging a show for the Paris Opera. He would be honored with the Chevalier of the Legion d’Honneur in 1960 and, of course, made a memorable appearance in Jacques Demy’s Young Girls of Rochefort (1967).

Without deep knowledge of his life, I cannot attest to whether or not this affection has roots in An American in Paris or sprouted earlier. But watching the film it’s easy to surmise it captures the unrealized dreams of Kelly’s heart. No, he was never a painter named Jerry Mulligan, but in his lifetime, he was an artist.

When we first hear his instantly placeable voice, providing genial narration, it’s not difficult to believe. Images of Parisian romantce are brought to the screen, and he recounts how he, Jerry Mulligan, went from being a G.I. to a struggling painter in love with France. He’s not the only one, as his pianist friend (Oscar Levant) is in much the same boat, though a little less jovial.

There’s an incessantly bouncy theme playing intermittently at any time our protagonist walks down an avenue with a spring in his step. Does it get a bit tiresome? Emphatically so. Still, we are reminded that Kelly is constantly on the move like a giddy schoolboy.

However, it’s a woman named Milo (as in Venus duh) who spots his work out on the street and takes an immediate liking in it. He’s not quite buying what she’s selling. First of all, no one’s ever given him a break before and secondly, she proceeds to invite him to a party that winds up being a very cozy affair: just the two of them. It’s not the type of patronage Jerry was hoping for, but her money is real enough, and he needs it.

And yet in this Parisian backlot as evoked by director Vincent Minnelli, it’s easy to envy such a carefree life full of benevolent locals, lazy cafes, and a plethora of song and dance to brighten any day. If hardship is spoken of, it’s very rarely seen in the flesh. People speak flippantly of their lack of funds or food because they always seem to get by. There’s an agreeableness to the facade.

Gene Kelly with the kiddos is priceless. He becomes their impromptu English teacher playing a game of “Repeat After Me,” which is in the toolkit of anyone who has ever taught a language. His pupils are eager and so what’s next but introduce an American song: “I Got…Rhythm.” Though the Gershwin tune wasn’t born in An American in Paris, it became fully rejuvenated in the hands of Kelly — arguably reaching a new apex.

He makes it more than a song — a malleable plaything for he and the kids to have a bit of fun with — goofing off and prancing about like cowboys and soldiers, then swirling like airplanes for good measure. The most important artistic movement in the picture might be its finale, but the most delightful one is found right here. Because we feel our own childhood antics rushing back.

As his relationship progresses with Milo (Nina Foch), it becomes more complicated since he’s not about to be a live-in companion even as the prevailing need for money remains in the front of his mind. One evening, in particular, he spies the most beautiful girl he’s ever seen (Leslie Caron), an enchanting vision, and immediately drums up some pretense to dance with her. He comes off too strong and alienates her in the process. Not to mention the lady he came with.

One might gather that in the real world Mulligan would be rather problematic and yet Kelly’s characters never seem to exist in the real world, and so his romantic diversions are easy to dismiss. That irascible Kelly charm comes in handy.

Meanwhile, we have the stunning paradox of Leslie Caron, that talented waif-like creature with the cherub face. Effervescently youthful in one moment and yet composed with an undoubted maturity about her even as Kelly comes off as the boyish suitor. She is initially showcased in a sequence meant to describe the contours of her personality as a ballerina, and each moment fittingly paints her in contradictory shades and subjects. She is all things and then none of them.

The most formative number, in terms of the blossoming of their love, is the Gershwin classic “Our Love is Here to Stay” danced gracefully at the water’s edge of the Seine, soaked in soft lamplight. But alas, it was not meant to be. There are too many obstacles in the way, and Mulligan fades into his fantasies — Kelly’s pride and joy — a 17-minute extravaganza.

Minnelli’s roving camera is in tandem with Kelly’s choreography. An apt illustration of how much Kelly’s work differs decidely from Fred Astaire. Ballet takes precedent in his work as much as inflections of jazz, and he was not averse to such cross-pollination as it were.

The sets are brimming with constant kinetic energy, splashes of color, and elaborate costuming with tones inspired by French masters. It devolves into a dazzling cornucopia carousel of dance, freely flowing against Gershwin’s title composition. All efforts are to elicit the French landscape with cafes, fountains, and chambers full of mirrors.

But it’s not simply a substantial musical routine dashed off or cut together from various interludes. Or if it is, then we can concede there is a certain purpose to its ebb and flow, like a dream existing in some ethereal world both of love and bittersweet uncertainty.

Kelly’s greatest gift to us as an audience is probably putting some form of physical expression to very human emotions, and he did it in a way that feels genuine and to a small degree, attainable for all of us. The love story onscreen is a fairy tale, but he is just the man capable of suspending our disbelief and charming us into fully enjoying the experience.

Perhaps he tries too hard in An American in Paris. How can you not like him? Perhaps Minnelli’s camera dances too much and Kelly and Caron, not enough. I’m not sure. But there are specific instances exceeding the constraints of straightforward narrative fluff. When it enters into the momentarily euphoric, mirthful, or even the deeply regretful. Those emotions stay with me indelibly and this is what the most earnest, most evocative movies are capable of at their best. 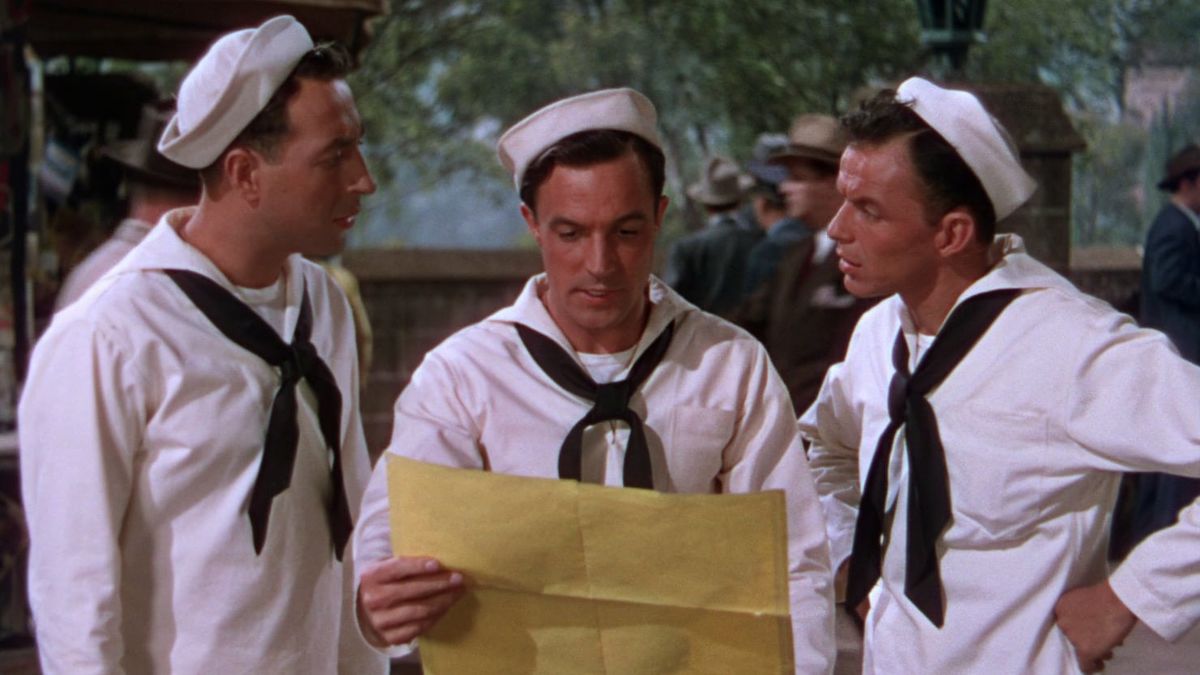 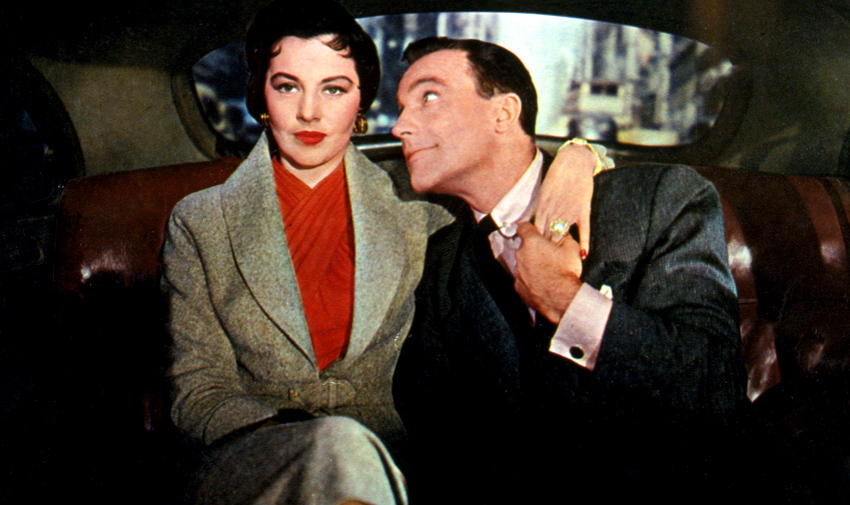 Starring Gene Kelly and Leslie Caron with director Vincente Minneli, this musical follows an American painter in Paris (Kelly) as he struggles with life and love. Jerry Mulligan is a painter who loves Paris and has made friends with many of the locals. The only problem is that he has no money. That all changes when a rich patron begins to sponsor him and his luck begins to change. Soon he becomes enchanted with a French girl (Caron) and after initial conflict they try to meet up whenever they can. At the same time Jerry is tied up with his patron and Lisa is engaged to a kind Frenchman who Jerry knows. When Jerry learns this he is devastated, however in the end he does get the girl. Although the final dance sequence seemed out of place, awkward, and too long, much of the rest of the musical is enjoyable. I Got Rhythm and The American in Paris Theme are catchy Gershwin tunes that Gene Kelly performs to perfection.