“I think it’s high time for this state to remember its history!” – Van Heflin

The whistling intro to Gunman’s Walk is one of the most insouciant beginnings to a western you might ever see. Regrettably, the opening lines of dialogue, penned by Frank S. Nugent, don’t stand up on their feet. It’s easy enough to understand Tab Hunter is a sharp-tongued pretty boy with a big chip on his shoulder. His reticent more unassuming brother Davy acts as his complete antithesis. This is the source of immediate tension, even visually, with the casting of such disparate actors as Hunter and James Darren.

Given these elements, the words coming out of their mouths aren’t of much use. It’s not simply in the opening arguments either but in their later verbal skirmishes. Even the brief interludes of candor, they are not always capable of holding a scene. They need a Van Heflin to work with, and he certainly makes them both better and more compelling. Because it is their conflict and confused relationship with him speaking to all other facets of the movie.

Gunman’s Walk finds its footing not only with the introduction of Heflin, but also when it settles into a story with ideas fueling relationships. We come to understand it to be more nuanced than mere bickering. Because with every fight there is an underlying trauma of some form. In the nucleus, you have the archetypal dichotomy between the two male progeny with divergent paths ahead of them. They are like Cain and Abel.

It’s their father who looks to guide them toward the straight-and-narrow or at least the western equivalent, which means molding them to be like he was when he was a boy. In fact, it goes further still. He wants to be one of the lads, even chiding them to call him by his first name.

Quick drawing, carousing, having a good time, and generally cultivating a “boys will be boys” mentality are all part of his regimen as their sole guardian. One boy shies away from this based on his natural tendencies and the other rebels more blatantly still, determined to be his own man, greater than his dad ever was.

Beyond their initial quarreling, we begin to comprehend the spirit of the brothers when they wander into the local mercantile. Tab Hunter notes the pretty “half-breed” working inside, and it’s the immediate barb to suggest this is also a drama about racism.

It cannot help but come front and center when Ed pushes a half-Sioux off the cliffside as he selfishly sprints after a prized white stallion, with no consideration of human life. The man killed, named Paul, happens to be the older brother of Clee (Kathryn Grant). She works in the mercantile and faces the debilitating, inbred bigotry of the town day in and day out.

What must come out of this is a trial. Because two bystanders speak up on behalf of their friend. They think it was murder, and it might as well be. But Lee will have none of it. He’s not about to let his son get railroaded by two natives.

It goes far to suggest a type of privilege not only earned arbitrarily through skin color but also in attributing who is memorialized in the history books and how they get remembered. Lee’s demonstrative cry to remember history is itself a highly ironic evocation, given the circumstances. Just what version of history is he talking about? Undoubtedly his version.

There’s a trial to follow and of course, Ed gets off. A crooked witness comes to his defense — upon hearing what a generous soul Hackett is — though the conniving passerby is no better than a horse thief. Meanwhile, Davy finds himself in a Romeo and Julietesque romance, at least in considering his father would never agree to a union with a Sioux.

Ever disconsolate, Ed dodges jail once only to end up there again, this time for gunning down his father’s blackmailer. His attempts to frame it as self-defense fool no one in town and Lee is flabbergasted. Why would he do such a thing? Ed feels like his father has gone against his own principles. They’re further apart than they have ever been.

There is no turning back when Ed blasts himself out of jail, murdering another man, with a posse now out to get him. Lee has no choice but try and beat them to his boy — to try and do anything he can to shield him. One wonders if it’s already too late.

The final showdown feels like a foreign dynamic — father pitted versus son — there is no other way to go about it with the law bearing down on them. It ends unceremoniously, though the emotional toil remains heady.

Tab Hunter absolutely blows through his clean-cut, boy-next-door image and tramples on it with the hooves of his horse for good measure. As a result of constantly fighting the demons of his own malice and being cast in his father’s shadow, he remains all but unrepentant to the last frame.

Each subsequent film I see featuring Van Heflin cements my estimation of him as a giant among the unsung heroes of Hollywood’s elite. This is by no means a great western, but in the moments unearthing some semblance of deep emotional truth, it is Heflin who guides them with a craggy vulnerability. The final two scenes are pure class. They tear your heart apart.

It’s quite the statement given that during much of the film we wouldn’t mind tearing him limb from limb. He hobbles off with his boy and the boy’s wife, and we actually have sympathy stored up for him. It’s an extraordinary achievement in a relatively minor western. 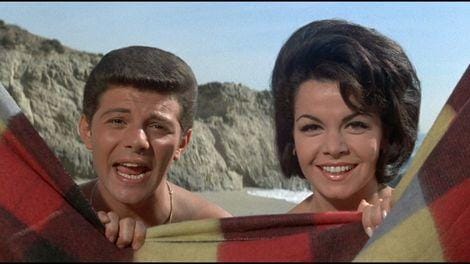