Okay, here we go with the next installment in the series of my favorite films. But, in case you missed #21-#25 and have a passing fancy to see what I fancy,  check them out Here…

16. Back to the Future (1985)
Doc Brown and Marty McFly. A delorean time machine. Awkward mother, son relationships. High School Dances circa 1955. Good ol’ fashioned rock n’ roll. These are only a few of the reasons that Back to the Future is a perennial classic and the best time travel film around. Two more installments followed re-teaming Michael J. Fox and Christopher Lloyd, but it’s hard to top the original Sci-Fi classic.

17. Shane (1953)
There are numerous classic westerns from the Golden Age, but Shane is one of the most unassuming. It’s a treasure of a film, revolving around of the great iconic heroes of cinema, the eponymous Shane. He’s a gunslinger, upright and kind, but he’s also deadly. Within the expanse of George Stevens’s tale of the untamed West, is a human heart and also foreboding moments of darkness. It’s the complexities of this film that bring me back to it time and time again. Its main character being a fascinating man indeed.

18. Chariots of Fire (1981)
Walking on that beach in St. Andrews Scotland was one of the most enjoyable things in my life thus far. Partially because it’s so incredibly gorgeous in a raw, untouched sort of way. But the other reason is due to this film, full of heart and some of the most inspiring music ever. By telling the biographical story of the likes of world class sprinters Eric Liddel and Harold Abrahams, it successfully blends so many things that I like. Sports, history, Great Britain, and deep spiritual dilemmas. Let us remember those few men with hope in their hearts and wings on their heels.

19. The Odd Couple (1968)
I’m a fan of comedies that boast good unadulterated fun. The Odd Couple is one such film born of a Neil Simon play and subsequently turned into a successful television show. This is the rendition starring the bickering duo of Jack Lemmon and Walter Matthau, both in fine form. They take this simple tale about two divorced men living together and make it a bellyful of laughs. Their poker playing buddies are a gas as well. It remains a classic with renewed value each and every time.

20. The Dark Knight (2008)
I am a product of the age of superhero films. Some mediocre, some simply run-of-the-mill, but few have left such an indelible mark as Christopher Nolan’s Dark Knight. What sets it apart is a villain, a most worthy adversary for the cape crusader. Heath Ledger’s Joker is the creme de la creme of cinematic bad guys, and he elevates this film to be one of the most intriguing moral tales released in the last decade. This is far more than a superficial action flick. 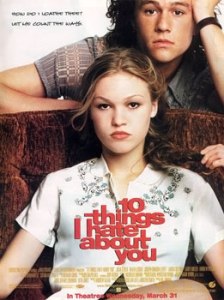 The opening notes of Joan Jett hollering “Bad Reputation” made me grow wistfully nostalgic for Freaks & Geeks reruns. The hope budded that maybe 10 Things I Hate About You would be the same tour de force narrative brimming with the same type of candor. It is not. Not at all. But that’s okay. It has its own amount of charms that forgive the obvious chinks in the armor of this very loose adaptation.

True, its story reads exactly like a book or rather a play, William Shakespeare’s Taming of the Shrew to be exact, but 10 Things I Hate About You succeeds due to the chemistry and charisma of its players. There is a genuine concern on the part of the audience as we watch them go through the interludes and rhythms that we already foresee beforehand. This is not the reinvention of the wheel in terms of high school romance films — not by a long shot — but the script coauthored by Karen McCullah Lutz and Kirsten Smith is equal parts lithe and witty. There’s actually some life to it, even if the plot is an age-old rehash of the Bard. It makes knowing what will happen next of lesser importance and more crucial how the resulting events will affect our protagonists — how they will deal with the inevitable teen drama.

Because the set-up is simple. There are two sisters. For arbitrary reasons, one of the said sisters cannot go to a party unless her older sister is also present. That’s at the behest of their resident oddball father who’s also a bit of a worrywart. Important for this tale is that everyone in school seems to know the set-up too. The smart aleck cool kid Joey Donner is looking to bed the perky Bianca (Larisa Oleynik) for the very reason that she is untouchable. Meanwhile, the starry-eyed new kid Cameron (Joseph Gordon-Levitt) falls instantly in love with this blonde vision. He doesn’t realize he has competition.

However, it all seems for naught due to Bianca’s “shrewish” sister Katherine (Julie Stiles) whose acerbic outlook on life seems destined to lead to dismal isolation. It’s no wonder she curls up in her living room with Sylvia Plath. Still, not to be outdone Joey enlists the help of resident bad boy Patrick Verona (Heath Ledger) to win Kat over and get her on a date. So right there you have the basis for the entire film with our two sisters and two parallel love stories (or loathe stories) with the cool kid running interference while also putting Patrick on his payroll.

At this point, it’s not necessary to get into all the gory details because we’ve probably seen them all before. But for some strange unknowable reasons I accept its cliches and sappiness and that, once again, I credit to the cast. Ledger and Stiles work well together churning up the sparks, he by exemplifying an equal dose of good-natured charm and roguishness.  She is simultaneously able to balance the necessary contempt with genuine care. She cares for her sister, her father, and ultimately Patrick as well. Larisa Oleynik is a capable counterpoint to Stiles and although his role feels relatively minor, Levitt wins the sympathies of any person ever on the outside earnestly looking in.

A major highlight involves Ledger lip syncing to Frankie Valli with synchronized band accompaniment as he tries to win back Kat while concurrently evading campus security. It’s in such a devilishly charming (or dorky) moment where he seems to have won Kat over for good. Although that’s not quite the case, he has the audience on his side for a great deal of the time after that. It only takes the final act for Kat to get there too. It takes a literature assignment of gushy poetry about how much she hates him, for her to realize that she hates being without him even more. Is this destructive? Maybe, but this is a movie about teenagers and teenagers aren’t supposed to have everything figured out. That’s part of the reason why we still readily watch movies about them.

In honor of the release of The Dark Knight Rises next week, the last installment of Christopher Nolan’s Batman trilogy, I would like to review The Dark Knight.

Starring a great cast of characters including Christian Bale and Heath Ledger, this is a great incarnation of Batman. In this film Bruce Wayne, alias Batman (Bale), faces his biggest challenge to protect Gotham City yet in the form of the villainous Joker (Ledger) With the help of Commissioner Gordon, Harvey Dent, Lucius Fox, and of course Alfred, he works to bring peace. However, the Joker is not your everyday criminal. This psychotic villain’s only goal is to create utter chaos and he forces the Batman into difficult choice after difficult choice. By the end, the lines are so blurred it is hard to tell who actually won. Ledger’s performance alone makes this movie a good one. His unpredictable and chilling portrayal has the audience constantly intrigued. Thus your everyday action packed, superhero film becomes an unconventional showdown between good and evil.
5/5 Stars

We will have to wait and see what the third installment starring Bale, Tom Hardy, and Anne Hathaway, has in store for us.